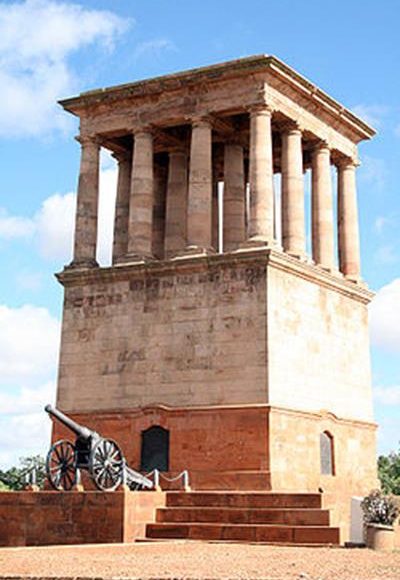 During the 2nd South African (Anglo Boer) War, Cecil John Rhodes sent the architect Herbert Baker around the world to seek ideas for a monument he intended to build in honour of those who died defending Kimberley during the siege. Rhodes would not see the completed monument as he died (of heart failure, at the age of 49) some months before the surrender of the Boer republics in November 1902.

In particular he visited historical monuments in Greece where he made a number of key sketches.  The caption on one of the sketches says:

he final monument in Kimberley was dedicated on 28th November 1904 (after Rhodes had died). It is the tomb of 27 soldiers and features a dedication inscription by Rudyard Kipling as well as bronze plaques by Kipling’s father. The sandstone was imported from the Matopo Hills in Zimbabwe where Rhodes was subsequently interred.

Built of Zimbabwean sandstone, the base of the memorial bears an inscription by Rudyard Kipling, which he wrote specifically for this memorial: “This for a charge to our children in sign of the price we paid. The price that we paid for freedom that comes unsoiled to your hand. Read, revere and uncover, here are the victors laid. They that died for their city being son’s of the land.”

The Making of Long Cecil

‘Long Cecil’, the field gun made and used during the siege of Kimberley is mounted on the stylobate of the Honoured Dead Memorial, surrounded by shells from the Boer ‘Long Tom’.

At the beginning of the siege, the artillery defence of Kimberley consisted only of 7 prs and 2.5 in RMLs. An American engineer with De Beers, Mr George Latham therefore suggested that he should attempt to make a gun of a calibre better able to deal with the Boer guns.

This gun was designed and constructed by engineers who had no previous experience of ordnance manufacture.  Without special plant or arrangements. And on designs adapted from descriptions found in a stray copy of an engineering journal.

Its construction, from the day that designs were fashioned, took 24 days.  And, on the next day, it was in action against the enemy. During the first few days, it occasionally broke down.  However  the defects were soon remedied and it remained in action until the end of the siege.

Long Cecil’ fired 225 shells against the Boers at an average range of 5,000 yds. Its activity forced the Boers to send for a ‘Long Tom’.  Ironically, Mr Labram was killed by one of the first shells that this ‘Long Tom’ fired into Kimberley.