HOW TO SEE THE BEST OF SOUTH AFRICA IN 12 DAYS 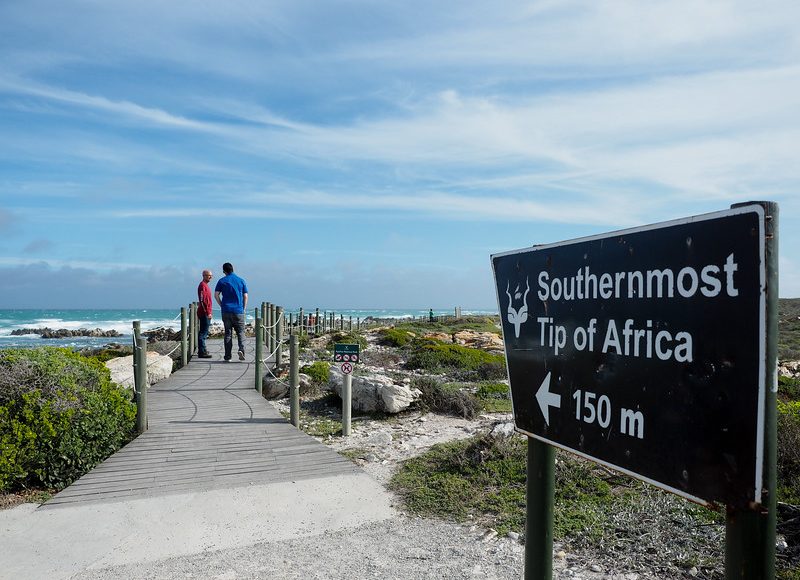 HOW TO SEE THE BEST OF SOUTH AFRICA IN 12 DAYS

n the past few years, South Africa has raced to the top of many travellers’ must-visit lists. Filled with stunning vistas, cool cities, and all that famous African wildlife, the country really does have it all.

Add to this a strong US dollar and weaker South African rand, and it’s never been a better time to travel to South Africa.

If you’re considering a trip to South Africa this year, here’s a 12-day itinerary that will help you experience the best of what this great country has to offer.

Day 1
Arrival and transfer to Gansbaai

Most people would probably have you start your South African adventure in one of the country’s major cities like Johannesburg or Cape Town. But I’m actually going to suggest that you fly into Cape Town and then head to the little coastal town of Gansbaai in the Western Cape.

Gansbaai is most famous for being close to Dyer Island, where lots of great white sharks can be found. But the real reason I’m suggesting you start out here is because the town is both beautiful and super laid-back, making it an excellent introduction to South Africa.

Spend your first half-day strolling around the town and catching a beach-side sunset.

Where to stay: My pick is The Roundhouse, a locally-owned guesthouse that’s very unique. It has a hot tub on the top deck with views out over the town and ocean, and the breakfasts can’t be beat. (Plus, they can transfer you from/to Cape Town, and arrange any activities you might want to do in Gansbaai.) (Read reviews | Book here!)

Where to eat: Speaking of meals, definitely have one at Blue Goose, which serves up fresh local seafood and some of the tastiest South African beef.

One of the biggest draws of Gansbaai is, of course, the great white shark diving trips. I recommend going with Marine Dynamics because of their pledge to marine conservation, but most companies in Gansbaai (of which there are many!) offer very similar experiences.

If shark cage diving doesn’t appeal to you, you might want to get your adventure on by hitting the sand dunes on a fatbike instead. Roundhouse owner Dave Caravias also runs Fatbike Tours, which offers up a few different tour options in the Gansbaai/Hermanus region.

Whichever adventure you choose, you’ll be back in Gansbaai by late afternoon. Decompress in the Roundhouse’s hot tub, and enjoy another South African sunset.

Where to stay: At The Roundhouse again, of course!

Day 3
Go to the southern tip of Africa

Many people incorrectly think that the Cape of Good Hope near Cape Town is the southernmost point of Africa. But this actually isn’t true! The real southernmost point is at Cape Agulhas, about an hour and a half from Gansbaai. Visit the lighthouse here, as well as the point where the Indian and Pacific oceans meet.

We stopped for lunch at the Pelican’s Harbour Cafe in nearby Struisbaai, where I had the best (and cheapest!) seafood platter of my life.

Seafood in South Africa
This only cost $11 USD!

If you’re up for more sightseeing (and a little extra driving) in the afternoon, consider heading north of Gansbaai to the Walker Bay wine region. I loved the tasting room at Creation Wines, located on the Hemel-en-Aarde Ridge.

*Note: Great white shark cage diving is highly weather-dependent, which is why it’s ideal to stay in town at least a couple of days in case your original tour gets canceled. You can easily swap Days 2 and 3 if the weather isn’t cooperative. (And, if for some reason you don’t have enough time to spend multiple nights in Gansbaai, you *can* book a cage diving tour from Cape Town.)

Now that you’ve settled into the South African pace of life, it’s time to head to the Mother City: Cape Town.

It’s about a 2-hour drive from Gansbaai to Cape Town, so you’ll want to start off early in order to make the most of your first day in the city.

Start your Cape Town explorations at the V&A Waterfront, home to South Africa’s oldest working harbour, a huge shopping mall, a Ferris wheel, and a large collection of shops and restaurants, all within view of Table Mountain. One of my favourite parts of the waterfront is the Watershed, which is essentially a large converted warehouse that now houses more than 150 vendors selling everything from original art to vintage clothing.

The V&A Waterfront is also where you’ll find the ferries that will take you out to Robben Island, which is home to the prison where Nelson Mandela spent 18 of his 27 years of political imprisonment. Ferries depart every 1-2 hours from Nelson Mandela Gateway at the V&A Waterfront, and tours of Robben Island are conducted by former political prisoners.

Whether you decide to spend your afternoon in the city or touring Robben Island, I suggest ending the day watching the sun set at Camps Bay, one of the more affluent areas of Cape Town. The beach at Camps Bay is nice, but at sunset the dying light paints the looming Twelve Apostles mountain range opposite the bay glow an otherworldly orange. It’s absolutely beautiful and is a great way to end your first day in the city.

Where to stay: I stayed at three different hotels in Cape Town:

The Commodore Hotel – This upscale hotel is comfortable, has a great breakfast, and is just around the corner from the V&A Waterfront. (Read reviews | Book here!)

The Taj – The Taj is a 5-star hotel in the heart of downtown Cape Town. Normally I would never stay in a hotel this nice, but right now it’s actually not exorbitantly priced. My dad and I were upgraded to a huge 2-room suite here, which was bigger (and way nicer) than my apartment at home. (Read reviews | Book here!)

The One 8 Hotel – If you’re interested in a more affordable hotel in a different neighborhood, I can recommend the One 8 Hotel in Green Point. The staff was super nice, and it was just a short walk to a really nice waterfront path. (Read reviews | Book here!)

Or, you can compare Cape Town hotel prices here to find even more options.

Where to eat: There are TONS of great restaurants in Cape Town to choose from. If you’re looking for something quick and nearby, though, V&A Food Market is a great place to find delicious street-food-type fare.

Start your morning off with a unique way of seeing Cape Town. My votes are either a helicopter tour, or a ride in the sidecar of a WWII-era motorcycle.

Helicopter tours of Cape Town aren’t a cheap outing (think at least $100-$150 per person), but it’s one of the best ways to see Cape Town. Even on a cloudy day, the views over the city are nothing short of stunning.

Or, if heights and flying aren’t really your thing, check out the city tours offered by Cape Sidecar Adventures. I did a short tour with them from Signal Hill to Hout Bay, which ended up being one of the coolest city tours I think I’ve ever taken! They offer a 2-hour tour that sounds like a perfect (and totally unique) introduction to Cape Town.

Next, no trip to Cape Town would be complete without a visit to Table Mountain. Which is the large, flat mountain that overlooks all of the Mother City. This symbol of the city isn’t always visible.  A cloud layer referred to as “the table cloth” often covers the mountain.  But if you hit on a clear day you should definitely take the cable car to the top.

The views out over Cape Town from Table Mountain are great – you’ll see everything from Lion’s Head to Devil’s Peak to the Atlantic Ocean.

Tip: Buy your tickets online ahead of time so you can skip the long lines at the foot of the cable car.

After Table Mountain head back into the city and visit Cape Town’s most colourful neighbourhood: Bo-Kaap. This small downtown neighbourhood is known as the Cape Malay Quarter.  And is known for its colourful houses, multicultural make-up, and great ethnic food.

Cape Town is great.  But you won’t want to skip a trip to the Cape Peninsula.

Start out with Chapman’s Peak Drive, a cliff-hugging road that connects Hout Bay in Cape Town to Noordhoek. There are a few viewpoints along the drive, including one that offers some amazing views back towards Hout Bay.

After the drive, make for Simon’s Town and the famous Boulders Beach. Chances are you’ve already heard of Boulders Beach.   It’s the postcard-perfect beach that is also home to a colony of endangered African Penguins.

You’ll actually find three beaches here.  It’s the boardwalks and penguin viewing area at Foxy Beach that get the most attention.

The beach at the far end of the protected area,  is one you can swim in.  Meaning you can totally swim with the penguins if there are any around!

Penguin at Boulders Beach, South Africa
You can swim at this beach!

The Cape Peninsula ends at Cape Point at the Cape of Good Hope. Even though it’s not actually the southernmost point in Africa, it’s still pretty cool to visit.

Cape Point is actually a nature reserve that’s part of the larger Table Mountain National Park.   So it’s not uncommon to see wildlife here like baboons and dassies ( or Hyrax)

The most popular thing to do is to take the Flying Dutchman Funicular  to the lighthouse at the top of Cape Point. From here, you get an incredible view out over the peninsula and ocean.

And if you don’t want to rent a car and drive yourself from Cape Town? You can book a full-day Cape Peninsula tour from Cape Town that will include all these highlights!

End of part one…

How to See The Best of South Africa in 12 Days