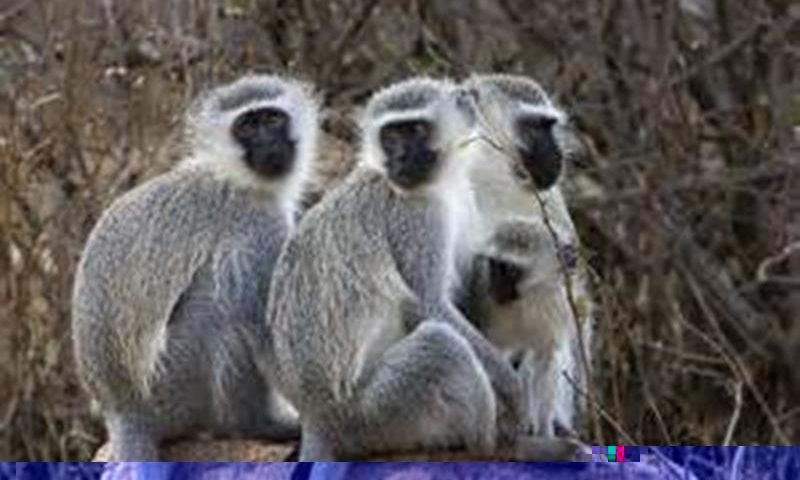 Vervet Monkey {Cercopithecus Aethiops}
Mischievous fury monkey that can interestingly cause quite a stir.
Vervet Monkey Description:
The vervet monkey is classified as a medium to large monkey. There is different types of vervet monkeys and vary in colour, but generally the body is a greenish olive or silvery grey.
The face, ears, hands, feet and tip of the tail are black, however an obvious white band on the forehead blends in with the short whiskers.
The males are slightly larger than females and are easily to recognize by their turquoise blue scrota. Its tail is held up, with the tip curving down. Arms and legs are the same length too.
Quick Facts
Size
18 to 26 inches.
Weight
Between 6 and 17 pounds.
Habitat
Woodlands, savannah and high plains. Their prefer a habitat which is acacia woodland along streams, rivers and lakes. They are diurnal and sleep and eat in trees from which they seldom venture.
Distribution
The vervet monkey is common throughout South Africa, hence the fact that it occurs wherever its habitat requirements are met.
Diet – Omnivores
Leaves and young shoots is just some of the most important foods to eat, but bark, flowers, fruit, bulbs, roots and grass seeds are also a tasty treat to eat. The mainly vegetarian diet is supplemented with insects, eggs, baby birds and sometimes rodents and hares. They rather seldom drink water.
Socialisation
Highly sociable animals, vervets form complex but stable social groups (also called troops) of 10 to 50 monkeys which mainly consist of adult females and their offspring. The male vervet move freely in and out of these groups.
Within the troop, each adult female is the centre of a small family grouping and females who have reached puberty generally stay in the troop. Vervet spend hours a day removing parasites and other materials from one another’s fur. In their hierarchy, dominants thus being dominant, get the most grooming.
Reproduction
Seasonal breeders, a single young is born after a gestation period of 5.5 months.
Life Expectancy
Up to 24 years in captivity.
Predators
Vervets rarely venture further than about 500 yards from the trees, since they are vulnerable to a variety of predators, including leopards, caracal, servals, baboons, large eagles, crocodiles and pythons.
Conservation Status:
Least Threatened
Source:  www.sa-venues.co/wildlife