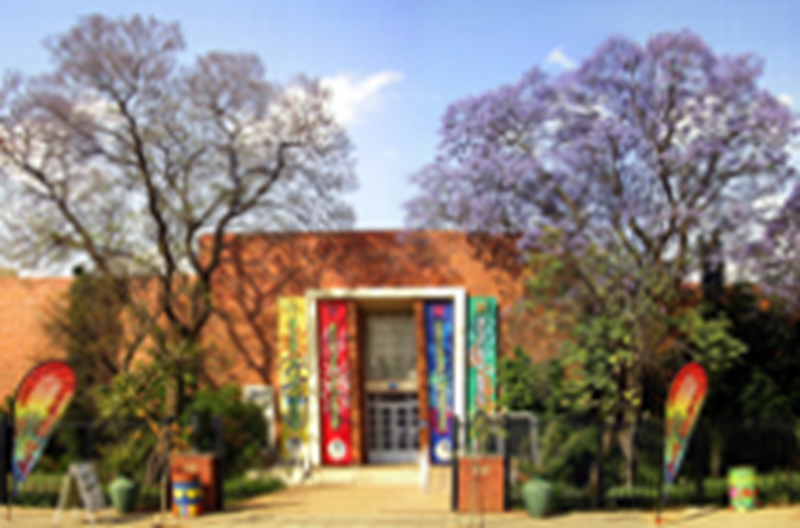 “Art enables us to find ourselves and lose ourselves at the same time.” – Thomas Merton

Nestled in the Oppenheimer Gardens and situated in the Diamond City’s Civic Centre is the WHAG.  It is considered one of the finest art museums in South Africa. It is a national heritage entity funded directly by central state.

William Benbow Humphreys – The second and very deserving freeman to be given the Freedom of the City (Kimberley) was Mr WB Humphreys, who received the honour in 1961.

Who was William Benbow Humphrey and where did he come from:

William Benbow Humphreys was born in Oudtshoorn on 5 April 1889, and came to Kimberley with his family at the age of 6 months. He was educated at Kimberley Boys’ High School from which he matriculated in 1908. Thereafter he studied at Elsenburg College of Agriculture later incorporated into the University of Stellenbosch.

In 1910 he married Maude Elizabeth Searle who had been born in 1890 at Blanco near George, but like her husband came to Kimberley at a young age. They were to have six children: Dulcie, Aubrey, Basil, Margery, Elaine and Winsome.
Mr Humphreys initially worked for his father S. B. Humphreys who was a general dealer and produce merchant. The business premises were in Giddy Street. In 1917 William had been elected onto the city council but in 1927 became a member of the Cape Provincial Council. In that same year he retired from the business to concentrate on his political career.
Two years later he was elected to the Union Parliament as the representative for Beaconsfield following the retirement of Sir David Harris from that position. From 1921 to 1930 he sat on the Kimberley School Board. In 1933 William was returned unopposed to the Beaconsfield seat as the coalition candidate of the South African Party. Mr P.E. Scholtz of Modder River who proposed the resolution recommending Mr Humphreys’ candidature did so because the latter was the ideal person for the position.
He was fully bilingual and thus could address the constituents in their own languages. This was essential as Beaconsfield was both an urban and a rural constituency.
English-speakers predominating in the former area and Afrikaans-speakers in the latter. Furthermore he was an independent businessman, not a novice in parliamentary affairs and had a large experience in all matters connected with the house, and was one hundred percent a coalitionist.

Mr Humphreys certainly proved worthy of the confidence shown in him. In that same year he was instrumental in getting the Government to agree to build the Vaalharts Irrigation Scheme. The four million pound project was to bring relief to the severe unemployment caused by the Great Depression, and in the long term resulted in a great improvement to the economy of the northern Cape.
At a special meeting in the City Hall on 2 November 1933 the Minister of Lands and Irrigation, Colonel Deneys Reitz, paid tribute to Mr Humphreys’ efforts towards the realisation of the scheme, at that time the largest of its kind in the southern hemisphere.
In 1938 when Sir Ernest Oppenheimer retired from Parliament as Kimberley’s representative Mr Humphreys took over in that capacity. On 29 October of that year he and Mrs Humphreys gave a cocktail party for General Smuts, not only a political ally (as leader of the United Party) but a personal friend, at their ‘lovely Carrington Road home’.
The guests were entertained in the outer court which was cool and fresh following rain in the afternoon. Mrs Humphreys was as usual a charming hostess with time to spare for everyone. She was ably assisted by her daughter Miss Dulcie Humphreys and Miss Onah Long, the fiancée of her younger son Basil. General Smuts, then the deputy prime minister, had opened the Gore-Browne Native Training School earlier that day.
William’s interest in art was already much in evidence at this time and his collection already fairly large. He travelled overseas frequently and bought paintings, sculpture, old furniture and object d’art of all kinds. He described picture hunting as a ‘tip-top but hectic’ holiday. His home Benbow Lodge at 46 Carrington Road was filled with these treasures and indeed had its own small gallery in the grounds built to accommodate more of the ever-increasing collection.  In 1948 he retired from politics having in all the 19 years he was actively involved in it never lost an election.
The year before Mr Humphreys had in a statement to the Diamond Fields Advertiser on 1 August, replied to allegations of unfulfilled Government promises made by G.S. Eden, at a Council meeting on 28 July. He said the old adage about ‘grass growing on Kimberley streets’ had become imprinted on the minds of its citizens and helped create a fear complex more than an inferiority one. This attitude of mind bad as it was had in past years done some good in Government quarters but harm in other ways.
Furthermore the view held by some, since the 1920s when the local mines office was moved from the Diamond City to Bloemfontein, that the latter city was the Government’s ‘blue-eyed boy and Kimberley its stepchild’ was not correct. It was ‘high time Kimberley threw off its morbidity’. One just had to look round the city and district to see signs of progress and development.
Mention was made of the proposed new railway station, railway workshops and court buildings. All· these, said Mr Humphreys, would materialise in the fullness of time but just at present houses for ex-soldiers and private individuals were top of the priority list.
Following his retirement from the hurly burly of Parliament William did not just continue collecting art but also had more time to devote to farming something else which he enjoyed. He had a large farm near Douglas where purebred Persian sheep were raised. However it was his love of beautiful things that took up most of his time. His collection was quite catholic but his favourite paintings were of the Dutch and Flemish schools of the 17th century.
In 1948 he donated a portion of his vast collection to the people of Kimberley and the northern Cape ‘in consideration of his long association with the public life of the northern Cape and his desire to further the interests of the said region’. It was to be known as the Humphreys’ Bequest and comprised a selection of European and British paintings, furniture and contemporary copies of classical sculptures.

The building of the Art Gallery

Initially the works were housed at the Northern Cape Technical College but the terms of the donation stated that a suitable building should be constructed for an art gallery. In this regard William gave a large sum of money towards the building costs and on 5 June 1952 he laid the foundation. stone of the gallery which bears his name. It was a simple ceremony and Mr Humphreys in his speech said that there were too few galleries in the country, but then it was a young country.
He hoped in particular that the younger generations would take an interest in the Gallery. Furthermore even if the ‘artistic bug’ only affected one percent of visitors to it the institution would be serving its purpose. In introducing Mr Humphreys, the Mayor Mr JP Smit said ‘we in Kimberley are proud of you. It is a pity that there are not more men of your caliber’. Six months later in December the Art Gallery was officially opened by Mr Harry Oppenheimer.
In the early days of its existence Mr Humphreys acted as curator, secretary, caretaker and virtually everything else. Unfortunately he was not, it would seem, a good administrator and most of the early documents pertaining to the Gallery and collections were lost.
That however should not take anything away from the fact that it is largely due to Mr Humphreys that Kimberley has an art gallery today, and that the collection he amassed during his lifetime forms an integral part of its collections. This contribution was recognised and acknowledged on 5 April 1960 at a special function held in the Art Gallery. The mayor Mr l Jawno said ‘there is no better name for this wonderful showplace’. He referred to the good work William had done in his ‘quiet, modest way’ and said he had been given his start in business by Mr Humphreys.
The latter gentleman said at the same function, which by a happy co-incidence took place on his 71st birthday, that he was no artist but had ‘always had a hunch for collecting paintings and antiques’. He expressed the view that a gallery could not thrive if it had to rely only on gifts and donations. It would become ‘static’. He hoped that one day the Gallery would have ample funds, and would be able to purchase the works of some of the great masters.
The following year Mr Humphreys received the ultimate accolade for all he had done for Kimberley and the northern Cape, in so many spheres ranging from politics to the arts, when the Freedom of the City was conferred upon him. The ceremony took place in the Council Chamber on 14 September. At the function Mr GS Eden said of William that ‘without him the aspirations of this vast area of the northern Cape would never have seen the light of day in Parliament’. The outgoing mayor Mr Jawno said that Mr Humphreys had always worked unstintingly for the good of Kimberley without asking for anything in return.

The End of William Humphrey

William died on 25 July 1965. He was survived by his wife and children. The funeral, a civic one, was held on 28 July at the Newton Dutch Reformed Church. The Humphreys family had a close connection to it and William’s mother had given the handsome four-face clock and set of bells in the tower. The bells, which came from Hamburg, had been bought by Mr Humphreys at his mother’s request. He himself had given a beautiful set of collection plates to the church. The service was conducted by the Rev. W Fullard who also presided at the graveside in the West End cemetery.
There the leader of the Indian community Mr GW Naidoo spoke, saying of Mr Humphreys :  ‘he was one who was quick to appreciate other people’s hardships (and worked for the interests of the Coloured and Indian people of the city). He loved the poor and served his people with an understanding heart’.
On the day of the funeral the Art Gallery was closed as a mark of respect to its founder and benefactor.

Indigenous cookery of South Africa
Emotions in social marketing
Vacation, Safari, Emotions and all that jazz...
Northern Cape must see travel bucket list
7 things to look for when choosing a game lodge