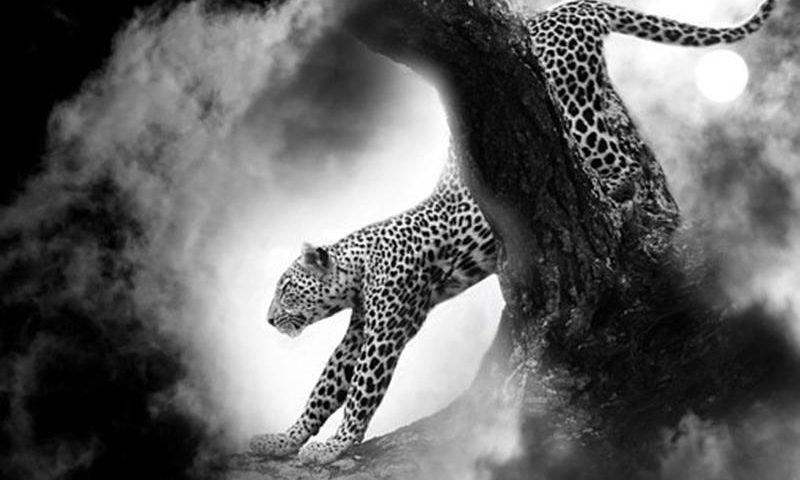 Amazing Facts about Africa’s Lions and Leopards – by Landia Davies

The Big Five of Africa – the most often mentioned, relentlessly searched for and much-loved five large African mammals.

These five wild animals were originally termed ‘the Big Five’ by big game hunters who found them to be the most difficult and dangerous African animals to hunt on foot. These days the term ‘Big Five’ is frequently (if not excessively) used in the African safari industry, where sightings, encounters and photo opportunities of these heavyweights are highly sought-after.

What are Africa’s Big Five animals?

You’ve probably heard the term, but do you know who the Big Five are? In no particular order of importance the Big Five are: lion, leopard, elephant, rhino and buffalo. Given that these formidable five are constantly in the spotlight, here are some interesting facts about each of Africa’s Big Five stars.

Africa’s apex predator and the second largest big cat in the world. Lions are not found in jungles. Instead, they can be found roaming the savannah grasslands and open plains of Africa.

They are the most social felines on earth. Lions are the only cats that live in groups (prides) and need a lot of contact with each other. Females share particularly strong bonds as they remain in the same pride for life and raise their cubs together, with cubs suckling from any of the lactating females.

These cats are loud: a lion’s roar can be heard up to 5 miles (8km) away, enabling them to communicate with each other over large distances. The males roar more loudly and frequently, usually to declare territory, call stray members of the pride and ward off rivals. Females call their cubs with quiet roars and also roar for backup when under threat.

Lions greet each other by rubbing their heads against each other, exchanging scents that convey information about their intentions, moods and recent activities. This tactile form of greeting also serves to form and strengthen the bonds between lions.

The females do the hunting, yet the males get the first helping, even when there are cubs in the pride.

They can see in the dark and most of the hunting is done at night, but they are not completely nocturnal. Lions are said to be crepuscular, which means that they are most active at twilight (just before sunrise or just after sunset). They are however opportunistic feeders that will hunt at any time.

Lions spend most of their time sleeping – these big cats sleep up to 20 hours a day!

The leopard may not be the biggest, but it is the strongest climber of the big cats in Africa. Known for their power and grace leopards are stealthy nocturnal predators with excellent night vision.

Unlike lions, leopards are anti-social loners. These solitary cats avoid interacting with each other beyond mating and raising young cubs.

The largest cat species to climb trees regularly. Leopards can drag prey weighing up to three times their own body weight up into trees over 20 feet (6 meters) tall and they can also hunt from trees. Leopards even nap in trees!

These adaptable felines are found in the most diverse habitats of all the big cats, inhabiting both deserts and forests. Their ability to survive across a range of habitats has enabled leopard populations to survive in far flung parts of the world, including India, China, Central Asia and Africa.

Leopards don’t roar, they bark and snarl. When happy they even purr.

The leopard preys on a wide variety of species.  Insects, rodents and reptiles, to birds and mammals, including antelopes as large as elands, and even giraffes.

Leopards are not only comfortable in water, they are in fact strong swimmers that sometimes eat fish and even crabs.

A leopard’s spots are called rosettes as the clusters of dark spots resemble roses. Their light coats patched with dark rosettes provide excellent camouflage. Perfect  for these elusive hunters, especially in the dappled shade of trees.