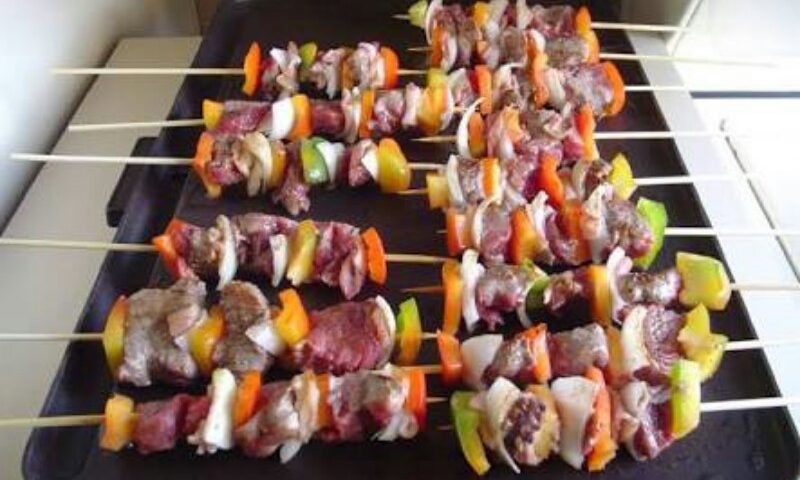 Authentic and Traditional South African Cuisine –  In the precolonial period, indigenous cuisine was characterised by the use of a very wide range of foods including fruits, nuts, bulbs, leaves and other products gathered from wild plants and by the hunting of wild game. The introduction of domestic cattle and grain crops by Bantu speakers who arrived in the southern regions from central Africa since 10,000 BC and the spread of cattle keeping to Khoisan groups enabled products and the availability of fresh meat on demand.

A Bit of History

The pre-colonial diet consisted primarily of cooked grains, especially sorghum, fermented milk (somewhat like yogurt) and roasted or stewed meat. At some point, maize replaced sorghum as the primary grain, and there is some dispute as to whether maize, a Central American crop, arrived with European settlers (notably the Portuguese) or spread through Africa before white settlement via Africans returning from the Americas during the era of the slave trade.

People also kept sheep and goats, and communities often organised vast hunts for the abundant game; but beef they consider as  the absolutely most important and high status meat. The ribs of any cattle that were slaughtered in many communities were so prized that they were offered to the chief of the village.

In many ways, the daily food of South African families can be traced to the indigenous foods that their ancestors ate. A typical meal in a South African family household that is Bantu-speaking is a stiff, fluffy porridge of maize meal (called “pap,” and very similar to American grits) with a flavourful stewed meat gravy. Traditional rural families (and many urban ones) often ferment their pap for a few days – especially if it is sorghum instead of maize – which gives it a tangy flavor. The Sotho-Tswana call this fermented pap, “ting.”

The vegetable is often some sort of pumpkin, varieties of which are indigenous to South Africa, although now many people eat pumpkins that originated in other countries. Rice and beans are also/very popular even though they are not indigenous.

For many South Africans meat is the centre of any meal. The Khoisan ate roasted meat, and they also dried meat for later use. The influence of their diet is reflected in the common Southern African love of barbecue (generally called in South Africa by its Afrikaans name, a “braai”) and biltong (dried preserved meat). As in the past, when men kept cattle as their prized possession in the rural areas, South Africans have a preference for beef.

Today, South Africans enjoy not only beef, but mutton, goat, chicken and other meats as a centrepiece of a meal. On weekends, many South African families have a “braai,” and the meal usually consists of “pap and vleis”, which is maize meal and grilled meat.

Eating meat even has a ritual significance in both traditional and modern South African culture. In Bantu culture, for weddings, initiations, the arrival of family members after a long trip and other special occasions, families will buy a live animal and slaughter it at home, and then prepare a large meal for the community or neighbourhood. Participants often say that spilling the blood of the animal on the ground pleases the ancestors who invisibly gather around the carcass. On holiday weekends, entrepreneurs will set up pens of live animals along the main roads of townships—mostly sheep and goats—for families to purchase, slaughter, cook and eat. Beef is. It is considered to have a high price. People use it  for weddings and affluent families will purchase a live steer for slaughter at home.

Vegetarianism is generally met with puzzlement among Black South Africans, although they serve most meals with vegetables such as pumpkin, beans and cabbage.

It is a traditional South African non-alcoholic drink, popular among many of the Nguni people. They make it from mealie pap that they ferment. Home production is still widely practised, but the drink is also available at many supermarkets.

Beer has been an important beverage in South Africa for hundreds of years among indigenous people. This was  long before colonisation and the arrival of Europeans with their own beer drinking traditions. Traditional beer was brewed from local grains, especially sorghum. Beer was so prized that it became central to many ceremonies, like betrothals and weddings, in which one family ceremoniously offered beer to the other family. Unlike European beer, South African traditional beer was unfiltered and cloudy and had a low alcohol content. Around the turn of the centuries, when white owned industry began studying malnutrition among urban workers, it was discovered that traditional beer provided crucial vitamins sometimes not available in the grain heavy traditional diet and even less available in urban industrial slums.

Today, most urban dwellers buy beer manufactured by industrial breweries that make beer that is like beer one would buy in Europe and America, but rural people and recent immigrants to the city still enjoy the cloudy, unfiltered traditional beer.

Differences with some nationalities

Compared to an American, Korean or western European diet, milk and milk products are very prominent in the traditional Black South African diet. Milk was abundant because they did consider cows to be a very desirable domestic animal in precolonial times. In the absence of refrigeration, various kinds of soured milk, somewhat like yogurt, were a dietary mainstay. These people would offer a visitor to any African village in the 1800s  a large calabash of cool fermented milk as a greeting. Because milk cows allowed women to wean their children early and become fertile more quickly, local cultures had a number of sayings connecting cattle, milk and population growth, such as the Sotho-Tswana saying, “cattle beget children.” Today, in the dairy section of South Africa’s supermarkets, one will find a variety of kinds of milk, sour milk, sour cream, and other modern versions of traditional milk products.