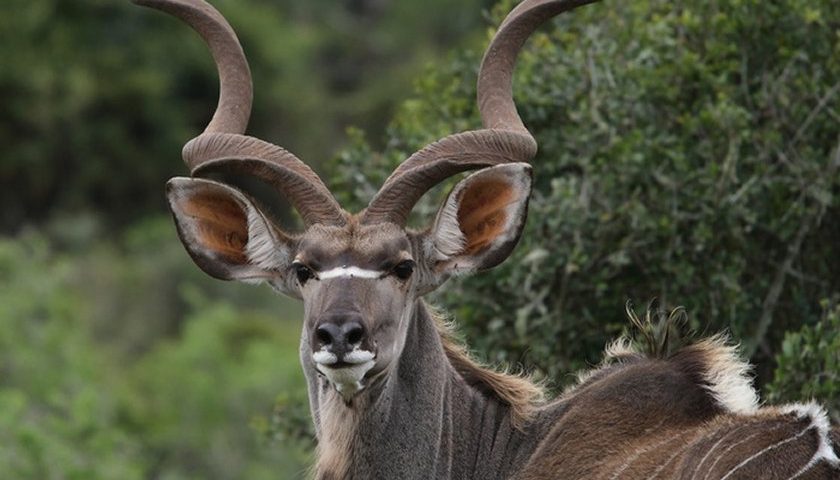 Kudu are beautiful and majestic animals and a true gem in Africa. Hiding and blending in with their surroundings so cleverly awarded them  the name of Ghost of The Bush.

Two types of Tragelaphus species exist , Tragelaphus strepsiceros ( the Greater Kudu) and Tragelaphus imberbis ( the Lesser Kudu).  These two species are very similar with the difference being that the Greater Kudu has a larger body than the Lesser Kudu. The animals do not have a lot of stamina and cannot run for long distances.  They prefer to stay hidden during the day while grazing and will sleep at night. They are able to jump as high as seven feet into the air.

Males have bigger bodies with long spiral like horns where as females have smaller bodies with no horns and they also have a mane that is prominent in the Greater but absent in the Lesser. Narrow bodies, long brownish legs with an outer coat color ranging from brown to slightly bluish gray with four to twelve thin white bands across the the torso gives an clear indication of how they look.

Their diet consists of leaves,grass,shoots,tubers,roots and some fruits, therefore they need stony, sparsely to densely forested, flat hilly and mountain country. Their presence in this kind of area or habitat attracts predators like lion and leopard.

Kudu have a gestation period of 8 months in which the females only bare one calf. Herds of 6 – 20 animals are the norm consisting of females and young animals, where males are solitary. Preserving and sustaining such herds are of great importance mainly because of numbers and habitat being lost by modern day growth and over population in some areas.  Drought also has a big impact on these herds causing insufficient natural water supply and plant growth. They are also prone to rabies and sometimes enter human settlement such as farms.