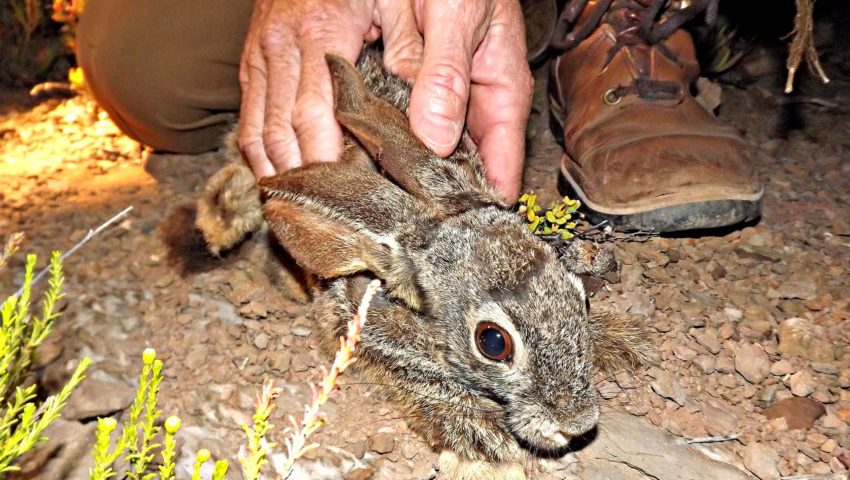 The Riverine Rabbit is a beautiful and rare animal.  It is also known by the names, Boshaas, Pondhaas, Doekvoetjie, Vleihaas en Bushman’s Hare. Currently it is on the critically endangered specie list.

The colouring of the rabbits body is an earthy brown, typically characterised by the darker brown stripe that runs along the bottom jaw, and the white ring around each eye.  The belly is lighter brown than the top and the tail is a uniform woolly brown with no markings, unlike its back, which has flecking.  This unique colouring aids in its camouflaging against predators.

The habitat of the Riverine Rabbit is in a specilzed zone known as riparian, which referes to the area between the land a river.  This fine alluvial soil of the floodplains is ideal for the rabbit’s needs, which include building stable burrows in which to live and breed. It is a rare and wonderous thing to spot the Riverine Rabbit, for it is only found in the southern and central parts of the Karoo Desert.

This unique animal is a herbivore and feeds on the leaves and flowers of the wild vegetation in its habitat.  During the rainy season, it will include the soft sweet grass as well.

It is a nocturnal animal and during the day it hides in shallow scrapes under the bushes. They are polygamous while they live and browse for food as solo creatures.

Unlike other rabbits, this rabbit has a particularly slow breeding rate, with only one or two babies being born to a female throughout the course of an entire year. These rabbits will mate with a number of individuals, and are the only known rabbit species to make nests for the baby.  Very rarely two kits may be born at once.  This animal as a gestation period of around 35 days.

What is so devastating is that is critically endangered.  Not long of the discovery in 1902, its was also known as the “pondhaas” because Camptain G.C. Shortridge, the curator of the Kaffarian Museum in King Williams Town, offered a pond for each rabbit brought to him.  There is no state-owned land protecting the riverine rabbit and its habitat and already two-thirds of its original habitat gas been destroyed.  The most known habitat occurs on private land.  Road kills, dogs, extensive livestock grazing and potential events such as flooding, fire and disease is just some of the everyday threats.

The Endangered Wildlife Trust has established a Riverine Rabbit Programme to manage and coordinate the Riverine Rabbit Conservation Project, maintaining a close relationship between landowners and conservation authorities and to ensure the survival of this special little animal and its habitat.