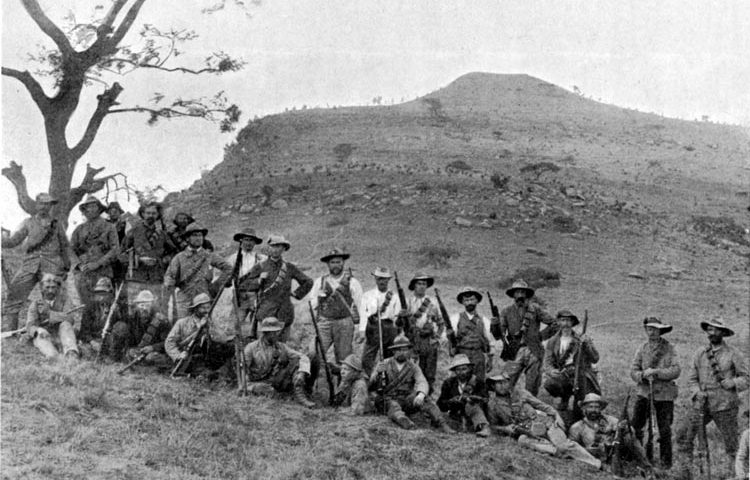 Anglo-Boer War : Belmont – Methuen’s first battle, took place on 23 November 1899. Thirty kilometers from the Orange River the British came on the Boers on a twp-ridge stronghold. After a night march they attacked at dawn.  Methuen’s original plan fell apart and the conflict became a soldier’s battle which, fortunately for Methuen, succeeded.  The Boers melted into the veld.  The Grenadier Guards lost 22 of the 54 killed, 115 were wounded.  The Boers lost 26 men.

Anglo-Boer War: Graspan –  on 25 November 1899, was similar to Belmont, albeit on a smaller scale, Graspan, also known as Enslin or Rooilaagte, 16 kilometers further along the road to Kimberley, lay on a line of kopjes straddling the railway.  The key to the battle, a short, steep kopje, was on the Boers’s left flank.  Methuen attacked it with, among others, the Naval Brigade, who captured it at great cost.  The British lost 16 men and the Boers 23.  A Naval Brigade memorial rests on a small kopje west of the road.

Anglo-Boer War: The battle of Modderriver – on 28 November 1899 covered a wide front, the center being the junctions of the Riet River an dthe Modder River and the Railway bridge.  The British were pinned down for the day by Boer fire from across the river.  Generaal Koos de La Rey, after studying Boer tactics at Belmont and witnessing Graspan, suggested using the riverfront as a defense.  It cost the British dearly.  Crossing the Modder River bridge you are today, still able to see the railway bridge blown up by the Boers in October 1899.  Next to the bridge is a 1901 blockhouse built to defend the reconstructed bridge.  The Boers were placed along six to seven kilometers of riverfront.  The British walked straight into a withering fire.  The British eventually broke through the Boers right flank at Rosmead (now called Ritchie) The Boers retreated to Spytfontein an then to Magersfontein.  Lord Mathuesen stayed at Modder River for three months.

Anglo-Boer War: Magersfontein – the main battle on 11 December 1899, is ten kilometers form Modder River and 35 kilometers from Kimberley along the airport road. Kimberley, The Battlefield has an informative museum and lookout post.The trenches and Bisset’s farnillouse – was used as ‘n Boer first aid post. Two more notable memorials are those to the Black Watch, an to the Scandanavians who fought alongside the Boers.  Of the Highland Bridge, the Black Watch suffered most when the Boers open fire from hidden trenches.  Their former Commanding Officer, Andy Wasuchpe, then General commanding the Highland Brigade, was killed.  Kimberley was under siege at the time.