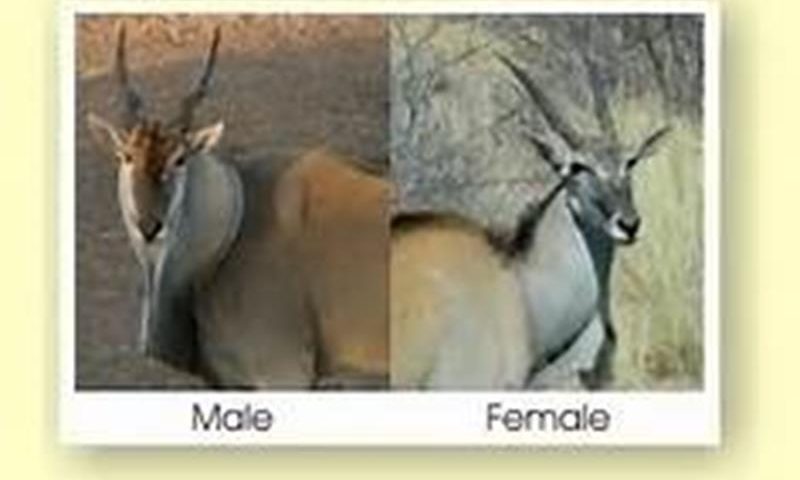 Common Eland – majestic, large and unforgettable.
Description:
Common Eland is one of the largest antelopes in existence. Its coat is tan, fawn or tawny coloured, turning slightly bluish-grey on the neck and shoulders with age, and a short dark mane runs down the back of the neck.
Both male and female possess horns that rise with a slight twist, back from the head to sharp points. The horns of the male are more robust and bear more distinct ridges than those of the female. The massive adult males can also be recognised by the large fold of loose skin that hangs below the throat (the dewlap), and the patch of long, coarse, dark hair on the forehead. These features become respectively larger and bushier with age.
The common eland has a fairly small and pointed mouth and muzzle, small, narrow ears, and a long tail with a tuft of black hair at the tip. A distinct clicking sound is heard as the common eland roams around its habitat; this unusual and distinctive feature is believed to be the result of two halves of the hoof knocking together when the foot is being risen or by the movement of bones in the leg.
Size:
Male head-body length: 240 – 345 cm
Female head-body length: 200 – 280 cm
Tail length: 50 – 90 cm
Male weight: 400 – 942 kg
Female weight: 300 – 600 kg
Biology:
This eland is a social antelope, forming open, fluid herds 25 to 60 animals, occasionally congregating in groups of over 1,000.  This occurs particularly during the rainy season . Mature males generally form herds, as do mature females, and young common eland congregate in nursery herds. Within these herds, a hierarchy exists, which determines access to things such as receptive females (if a male), and feeding sites (if a female).
Males are not territorial, but will be possessive over females that is receptive to mating.
While mating and births may take place at any time of the year, mating’s are most common during the rains, resulting in a peak of births nine months later at the end of the dry season . Each female bears a single calf, remaining hidden in vegetation for the first two weeks of life.Calves grow remarkably quickly, due to the richness of the nutritious eland milk, and they soon join a nursery herd. Common eland are able to live for up to 25 years.
Foliage and herbs comprise the bulk of the common eland’s diet, but this antelope also consumes fruits, seeds, green grass, and will dig in the ground for tubers,/roots and bulbs. Being adapted to the arid conditions of many parts of Africa, the common eland is able to survive without water. As long as it feeds on a sufficient amount of succulent, moisture-rich food. This is why, although active during the day and night, it is most often found feeding during the night, when the vegetation has absorbed moisture from the air and provides a meal with a higher water content.
The common eland is also adaptable to conserve any precious water it has, thus allowing the body temperature to rise during the day, hence reducing the need to sweat. As the sun sets, the body heat then radiates out into the cooler night air.
Range:
Once widespread throughout suitable habitat in southern, central and east Africa, from South Africa north to the Democratic Republic of Congo and Kenya. The common eland has now become extinct in many areas, and populations have declined in others.
Habitat:
The common eland is primarily an inhabitant of woodlands and woodland savannah. It is found from coastal plains up to mountainous areas and from semi-desert to areas of relatively high rainfall.
Status:
Classified as Least Concern (LC) on the IUCN Red List.
Threats:
Over-hunting appears to be the greatest threat facing the common eland. It results in its elimination from many areas. However, it is still widely distributed. It occurs in numerous protected areas, and there for not considered threatened with extinction yet.
.
Conservation:
The common eland occurs in many protected areas throughout its range. The areas that this includes is: Kafue National Park,/Zambia, Etosha National Park and Namibia. The Cape Floral Protected Areas of South Africa, a World Heritage Site, as well, thus in some countries, the common eland is confined entirely to national parks and game reserves.
The continued protection and enforcement of these areas is therefore essential for the common eland’s future survival.
www.unep-wcmc.org/medialibrary
www.iucnredlist.org
www.awf.org/content/wildlife/detail/eland