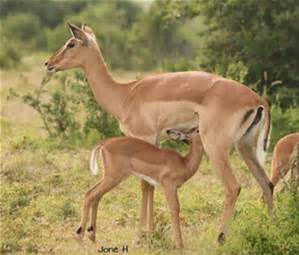 Physical Characteristics
The body is reddish-brown with white hair inside the ears, over each eye and on the chin, upper throat, underparts and buttocks. A narrow black line runs along the middle of the lower back to the long tail, and a vertical black stripe appears on the back of each thigh. Unlike other antelopes, impalas have large, brush like tufts of long, coarse black hair that cover a scent gland located just above the heel on each hind leg.
Habitat
Impalas are found at grassland and woodland edges, usually very close by water.
Behavior
Their social organization allows impalas to adapt to prevailing environmental conditions. When food is plentiful, the males become territorial. In home ranges averaging 3 square miles, six to eight dominant males set up territories. They stand with erect posture, rub scent from face glands and make dung heaps to mark their territory.
The female Impala form herds of 10 to 50 or more and wander in and out of male territories. If they start to leave the territory, the male tries to herd them back to the centre, or he feigns danger just beyond his boundary by taking a stance normally used as a warning sign. He tries to mate with females in oestrus and defends his territory from challenging males. Bachelor males are allowed to remain in male territories if they ignore the females.
The territorial male’s challenger will have worked his way up through the hierarchy of the bachelor group until he becomes the dominant male. He then leaves the group and challenges a territorial male through horn duels, in which the males approach one another with slow, deliberate steps. At a signal, such as swivelling the eyeballs to show the whites or slightly nodding the head, they rush forward and clash horns, attempting to throw one another off balance. Although fighting can be fatal, males are protected by exceptionally thick skin over vulnerable areas. It is not the length of horn that gives a male the advantage but his condition and weight. When a territorial Impala  male begins to lose weight from his frantic activity, he is defeated and must return to the bachelor group to recuperate. There are times, however, when this territorial system is not maintained. In drier years the animals have to travel further to obtain food, and many smaller herds of females form. They move in and out of the territories so often that the males are very quickly exhausted. When this happens, territories are abandoned, and large, mixed tranquil herds of females and males form. When feed conditions improve, impalas revert to the territorial system.
Diet
Impalas eat tender young grass shoots in the wet season and herbs and shrubs at other times. During the dry season they must drink daily.
Caring for the Young
In East Africa young are born year round, but birth peaks usually coincide with the rains. The female leaves the herd and seeks a secluded spot to bear her fawn. After giving birth she cleans the fawn and eats the afterbirth. If the fawn is born at a time when there are few other young around, the mother will stay with it in seclusion spot for a few days or even leave it lying out for a week or more before returning to the herd. If there are many other fawns, she may take hers back to the herd in a day or two, where a nursery group may form. Because predators have more difficulty selecting an individual from a nursery group, the fawns are safer there.
The young are suckled for 4 to 6 months and grow rapidly, reaching maturity at a little over a year. The young males, however, are evicted from their mothers’ groups when they are 6 months old, staying around the edges of the herd until they join a bachelor group. During this transition period they are most vulnerable to predators. Males will not be mature enough to hold a territory until they are 5 or 6 years old.
Predators
The young are killed by jackals and the smaller cats, baboons, eagles and pythons. When in danger, impalas will “explode” in a magnificent spectacle of leaping. In their zig-zag leaps, they often jump over and across their companions, probably to confuse predators. They perform a high kick of the hind legs, a movement thought to release scent from the glands on the heels, making it easier for them to stay together.
Did you know?
The female is similar to the male but does not have horns. The male’s graceful lyre-shaped horns are 18 to 37 inches long.
During periods of intense mating the male vocalizes loudly, making a sound between a lion’s roar and a dog’s bark. Exhausted by such activity, males seldom can hold their territories for more than a few months at a time.
africanwildlife@awf.org

Time to visit South Africa
Tomato/Mozzarella Focaccia Sandwiches
Hunting can help wildlife. So can eco-tourism.
What’s It Really Like to Go on an African Safari?
HOW TO SEE THE BEST OF SOUTH AFRICA IN 12 DAYS