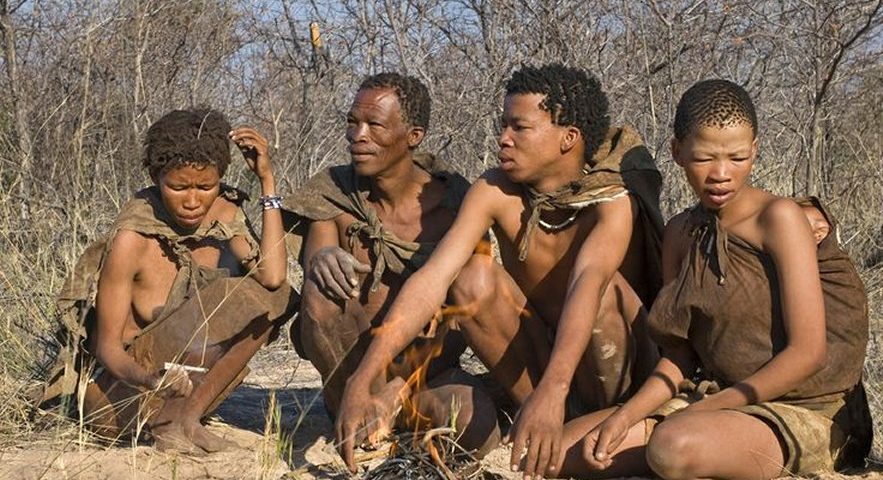 Bushmen or San People  are found in the Northern Cape of South Africa and in parts of Botswana, Namibia and even southern Angola.  They are one of 14 known remaining ” ancestral population clusters.

The southern group living in the Kalahari is the Khomani San and is the last remnant of the extensive indigenous San of South Africa.  In the last century many of the San were dispossessed of land or had their movement as hunter-gatherers curt railed by modern borders and the proclamation of the Kalahari National Park, nowadays called ” Kgalagadi Transfrontier Park”.  However, in 1995 they lodged a claim for the restitution of the land within the Park.

As a result, the San community was awarded a number of farms in the Mier municipal area – just south of the park, as well as 28 000 hectares of land within the southern area of the Kgalagadi Tranfrontier Park.  This is known as the Heritage Park and members of SANParks, Khomani San and Mier communities jointly manage it.

The Living Museum within the Park is an open-air museum where guests can learn about the traditional culture and original way that the San people lived.  They can also participate by trying to shoot an arrow with a traditional self made bow, take part in a craft of play and medicinal plant tours are also offered. Bows were made out of wood and animal hide with the string being coted with animal fat so that is would be soft and pliable. Different animals were worship according their beliefs and their upbringing.

Hunting with a bow and arrow, which has been a way of life for Bushmen for thousands of years, is a dying art due to the restricted access to traditional hunting grounds, new laws and a change in culture.  Although hunting has never been seen as a sport by the San, but rather a key element in their survival, currently it is possible to undertake a hunt with experienced San hunters, on the farm Erin or in the traditional conservation area adjacent to the park.

A Veld school was started by Oupa Dawid Kruiper as a means of ensuring that indigenous knowledge and skills are transferred to the younger generations of San that is left.  Deep within the dunes of the Kgalagadi Transfrontier Park, the pupils of this school are taught in the traditional manner and environment that it has been done for generations.

As the San people integrate with modern society, they take pride in sharing their skills as crafts people by producing articles such as beads made from ostrich shell, skin and leather bags, paintings, walking sticks and bone pipes to sell.

Ultimate Bucket List - Discovering Africa - Victoria Falls
South African Foods - Where and What to Find
The Northern Cape
Vacation, Safari, Emotions and all that jazz...
Meals and Enjoyment at Linksfontein Safari Lodge