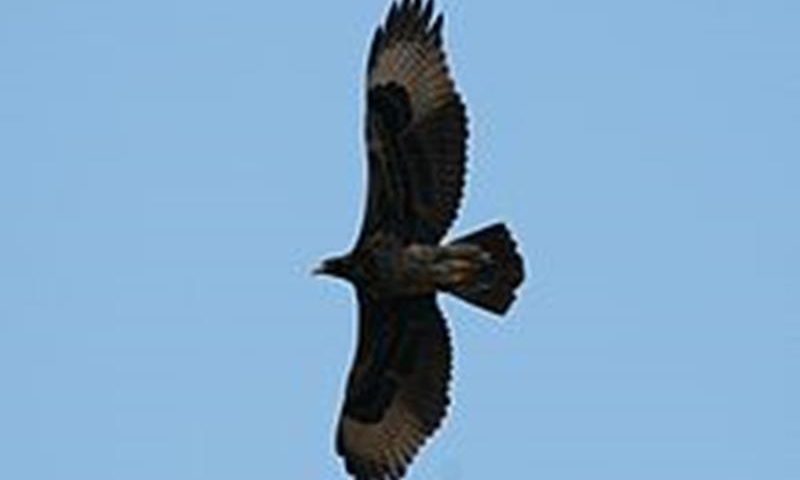 Verreaux’s Eagle -Verreaux’s Eagle  (Aquila verreauxii)  is a large bird of prey. Like all eagles, this species belongs to the taxonomic order Accipitriformes.  And the family Accipitridae, which may be referred to colloquially as accipitrids or raptors.

Verreaux’s eagle lives in hilly and mountainous regions of southern and eastern Africa. They are very local in West Africa, the Arabian Peninsula and the southern Middle East. It is one of the most specialised species of accipitrid in the world.  With its distribution and life history revolving around its favourite prey species, the rock hyraxes. When hyrax populations decline, the species have been shown to survive. This with mixed success on other prey. These include such as small antelopes, game birds, hares, monkeys and other assorted vertebrates. Despite a high degree of specialisation, Verreaux’s eagle has been fairly relatively well in historic times from a conservation standpoint. One population of this species is  in the Matobo Hills of Zimbabwe. It  is arguably the best studied eagle population in the world. It has been subject to continuous detailed study since the late 1950s.

Other than the female’s slight size advantage, adult males and females are physically indistinguishable from each other. Adult Verreaux’s eagles are mostly jet-black in colour. The yellow coloration of the cere (the bill is black), eye-ring and “eye-brows”, all stand out. This in contrast to the black plumage. Even more prominent on flying birds when seen from above is the white on the back, rump and upper-tail coverts and part of the scapulars. This forms a V-shaped patch. This feature is partially obscure in perched birds. Adults also have conspicuous white windows on the wing quills at the carpal joint  when seen flying both from above and below. The bill is stout, the head is prominent on the relatively long neck and the legs are full of feathers.

Juvenile and immature plumage differ markedly from the plumage of adults. They are overall a dark brown colour. Immature s have a strongly contrasting golden crown and a rufous or ginger nape and mantle. They have small white streaks on the forehead and black on their cheeks. The throat is dark streaked, the lower throat is pale brown and the upper-chest is brown. The rest of the underside is brown but for a blackish-blotched rufous to cream-coloured abdomen and lightly marked creamy thighs and legs. The feathers of the upper-tail and upper-wing coverts are brown with white streaks in young birds, while the other tail and wing quills are nearly black. When one sees the wing quills from below in flight, it  shows considerable whitish mottling.  With more extensive white in seen typically in adult plumage.

Difference in colouring as these birds mature

The immature has dark brown iris and yellowish feet. Black feathers increase from 2 to 5 years of age amongst a scattering of brown-tipped feathers, though the contrasting creamy trousers are maintained through the 3rd year. By the 4th year, they look dark grey brown with a buff patch on the nape and mottling of retained brownish feathers. At the end of the sub adult phase at around 5 years of age, the plumage is practically indistinguishable from the adult. They obtain plumage probably  in 5 to 6 years.

Differences in contrast to other birds

The Verreaux’s eagle is essentially unmistakable, especially in adulthood. No other black-coloured raptor in its range approaches this species’ large size, nor possesses its distinctive patterns of white. The golden eagle is of similar size or marginally larger size and the two species are the heaviest living Aquila species and measure only marginally less than the slightly lighter-weight Australasian wedge-tailed eagle in total wing and bill-to-tail length.While the juvenile Verreaux’s eagle is quite different from the adult’s, its plumage is no less distinctive. No other accipitrid shares the mottled brownish body, blackish wings with large white patches or contrasting whitish, rufous and golden colour around the head and neck as that of an immature eagle.

The flight profile of Verreaux’s eagle is also distinctive, as it is the only Aquila species other than the golden eagle to soar in a pronounced dihedral, with the wings held slightly above the back and primaries upturned at the tip to make a V shape. In the Bale Mountains of Ethiopia and possibly in some parts of the Arabian Peninsula and the southwestern edge of the Middle East, the ranges of the golden and Verreaux’s eagles overlap, but the golden is a mostly brown bird and shares none of the Verreaux’s black plumage. The immature golden eagle has white patches on its underwing as do Verreaux’s but they are less extensive than those of the latter species.

The wing shape also differs from the golden, as the Verreaux’s eagle has very broad outer secondaries and a relatively narrow pinch at the base of the primaries, whereas the tapering of a golden eagle’s wing is more gradual. Imperial eagles are another improbable but possible source of confusion. Since they too have white markings on their wing coverts. They are totally different in flight profile and overall coloration (dark brown).