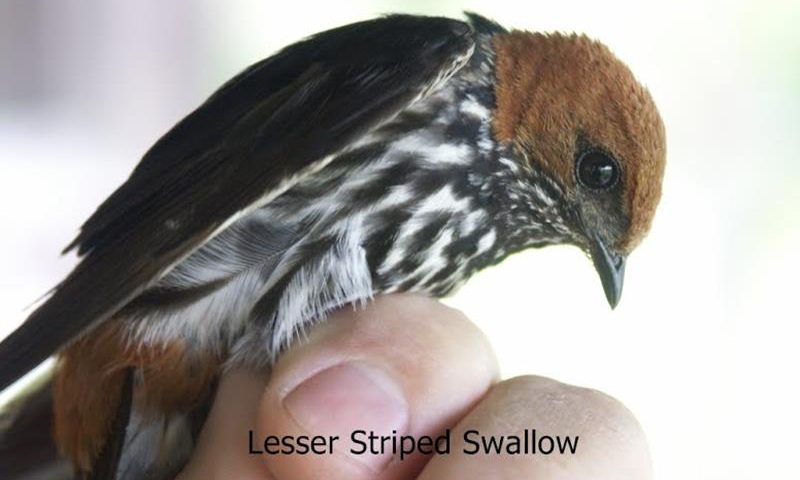 The Lesser Striped Swallow is a common breeding inter African migrant that occurs all along the East Coast into the Eastern Cape, and in the Northern part of South Africa from Johannesburg northwards.Their occurrence of these birds from north Zimbabwe happens  throughout the year although in smaller numbers, leading to thoughts that some birds from South Africa may migrate only as far as this region whilst the breeding birds from this area go further north. However the ring records of these birds can give no indication as to whether this a fact or not. This the reason being that all recaptures and recoveries did occur in the same area where they put a ring on each bird.

The greatest movement is only a distance of 83.94km this being a bird with a ring in Gauteng. The second greatest distance is 83.17km a bird ringed in Kwazulu Natal. All the other birds they recapture or recover within 10km’s of the initial ringing location. This is not hard to believe due to their habit of building their nests under the eaves of houses, also indicating that the birds return to the same nest year after year.

The time lapse between ringing and recapture shows some interesting data. The greatest elapse time being 5 years 333 days. This of a bird that had a ring in Durban Harbor, January 1957. He recieved a ring as an adult bird and they did a  recovery as a dead bird 8.49 km away, December 1962. The second greatest time laps being 5 years 185 days, also a bird ringed as an adult at Darvill Sewage Works in Pietermaritzburg, September 1989. They recapture and released it again at the same location in March 1995. A third bird ringed in Malawi in January 1982 as an immature bird was recaptured at the same location 5 years 33 days later.

Linksfontein Safari Lodge also has some of these nests, and they are truly a work of dedication and art.